Cataract Surgery has evolved over the last several decades in an extraordinary way from a procedure performed 300,000 to 400,000 times per year, mainly to treat blindness, to a procedure currently performed over 3 million times per year, often as a refractive procedure to maximize and refine visual outcomes.

This progress has raised the expectations of patients for optimal visual result and so the selection of specialized Intraocular Lenses (IOLs) has broadened to meet these expectations. Included in this repertoire are Accommodating IOLs.

What are Accommodating IOLs?

Accommodating IOLs are Premium IOLs. Premium IOLs can give a significant improvement in how your vision can be restored after Cataract Surgery. These are one of several options to deal with Presbyopia.

Presbyopia becomes evident around the age of 45 when accommodative (or focusing) ability decreases with increasing age. This focusing ability for near viewing/reading is typically lost completely by about age 55.

In line with wanting to find the fountain of youth, Baby Boomers today want to be free from such current solutions to their loss of near focusing ability as:

Instead, the hope is to restore true active and dynamic accommodation. Among the current efforts are Accommodating IOLs. Accommodation allows the eye to focus at different distances, whether distance, near or intermediate. 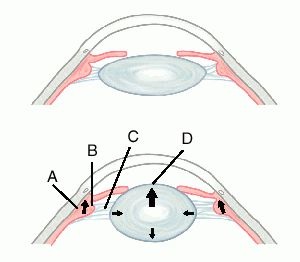 A. Contraction of ciliary muscles;

B.Approximation of ciliary muscles to lens;

The depiction above demonstrates the accommodation process. When the ciliary muscle contracts in the natural, young phakic (meaning having its crystalline lens) eye, the apex of this muscle moves toward the lens equator.

This action releases zonular tension around the lens equator and allows the elastic lens capsule to mold the young, soft lens into a more spherical form. The optical power of the lens increases, and the eye changes focus from distance to near.

The accommodative response in the natural phakic lens is very efficient not only because of the forward movement of the lens with near focusing, but because of an increase in the curvature of the anterior and posterior surfaces of the lens.

Accommodating IOLs induce a transient and rapidly reversible change in the optical power of the eye. This is accomplished in one of two ways:

If the IOLs are to succeed in restoring accommodation to the eye with Presbyopia, their design should be based on a thorough understanding of the mechanism of accommodation.

For this reason, Accommodating IOLs with surfaces that change curvature have considerably higher potential for generating substantial accommodation than IOLs that move forward in the eye without a change in surface curvature.

What Accommodating IOLs are currently available?

The Crystalens (Bausch and Lomb, Rochester, NY) is the only IOL approved for use in the United States in this category. Although these IOLs have been reported to have some beneficial near effect, their mechanism of action cannot be fully explained by a change in axial position.

Clinical studies using many measurement techniques have shown that lens movement is unreliable, small in amplitude, and in some cases, opposite in direction.

In order to make sense of the improved near vision experienced by some patients, other factors have been suggested:

Several Accommodating IOLs designed to change curvature upon accommodation are under investigation: 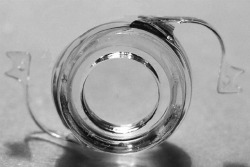 What other application can Accommodating IOLs have to improve vision?

If you opt for a Multifocal IOL to be added to your visual system after Cataract extraction, then you may experience distorted vision. Even if you have 20/20 vision, you may have significant Higher-Order Aberrations that degrade your sharp focus and visual acuity. Also, Multifocal IOLs also typically decrease Contrast Sensitivity.

Because of its design, the Crystalens is less likely than Multifocal IOLs to produce visual side effects at distance such as night vision problems.

This being said, it is important that your surgeon aligns your expectations with reality. Using a premium IOL like the Crystalens will not allow you to see as you did when you were in your 20s but rather as you did in your early 40s before the full onset of Presbyopia.

Return From Accommodating IOLs to Home 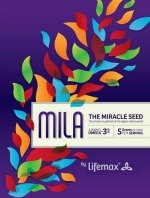